The color images for my take on “Winter's Light” were made on a visit to the abandoned grounds of the Northern State Mental Hospital in Sedro Woolley, Washington. I utilized a 4x5 box pinhole camera on a small tripod.
On the morning of my planned day of shooting on a brief trip to Washington State this past November, I arrived to the abandoned buildings of the Hospital's dairy farm and exited the warm heated car into brisk cold air that cut through my coat and shoes. To my chagrin, there was an unwelcomed break in the beautiful and dramatic clouds that filled the sky. Although I was counting on the spectacular layers of clouds in the sky to be the backdrop for my images, the sun broke through the clouds during my visit. Upon forced reimagintation of my plan, I noticed that the break in the clouds revealed beautiful long cool toned shadows produced by the low lying sun that seems to hug the horizon on the short days of Winter in the Pacfific Northwest. After almost wanting to give up, I decided to seize the opportunity to make my images What resulted were beautiful images, portraits buildings that were part of what once was a busy dairy farm, where the patients, who were able to, were put to work, sourcing the food served in the cafeteria from the cattle that roamed the farm just a few short decades ago.

The black and white image was taken with a 35mm camera on the road to Baker Lake in Washington State, which was my second destination that day to shoot photos. The fog had made it's way to the road, and we pulled off to the side as it was a sight I never see as a residence of Southern California, and I made this one image. As I was printing this image in the darkroom, I realized just how magical it is and how there is so much to say about what it can mean and at the same time it is such a simple yet beautiful image. 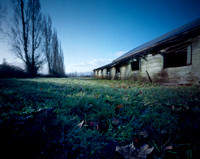 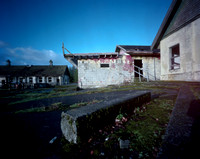 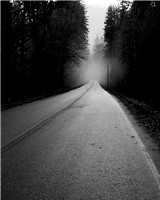