This Bedouin man was our guide to Rub Al Khali Desert in Oman. The desert stretches all the way to Saudi Arabia. The Bedouin are Normadic Arab people who have historically inhabited the desert regions in in North Africa and the Arabian Peninsula. Their territory stretches from the vast deserts of North Africa to the rocky sands of the Middle East. They traditionary herd camels and goats.
We drove so many hours toward north from Salalah. After passing Frankincense trees, geode fields, Shisr(few thousand years old city ruin discovered in 1992 and it is UNESCO World Heritage site) and Thumrayt, only thing we could see was huge sand dunes. During the trip, we stopped at a place where it was so calm and peaceful and our thoughts traveled to those desert travelers with no boundaries.
Keiko Yamasaki Photography 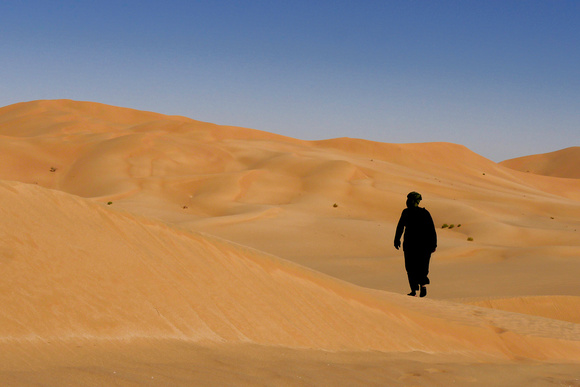