Robert Barry has had a passion for photography since the late nineteen sixties when he purchased a camera to photograph his first-born daughter. He quickly found that solely making family images did not satisfy his creative photographic appetite and started his investigation of the Urban Landscape style. From these early days his interests and pursuits have mostly been in the photo treasure hunt. He loves to wander in and around cities investigating and capturing images about how we build and decorate our environments. Robert finds beauty in things mundane to the majestic.

“My goal as a photographer is to incorporate my perception & expanding view of the world and art into the tangible and hopefully enduring pieces that I create. I photograph for the pleasure of seeing the world encapsulated in the frame. It is exciting to walk the streets of a city or other environment being hyper-aware of the Place. I respond to the visual, and emotional stimuli that I encounter. Puzzling pieces together from a three-dimensional world and forming photographs in two dimensions is a constant stimulation. I’m involved in recording the state of the urban landscape. My interest is affected by multiple factors including: culture, demographics, affluence, urban decay & redevelopment. The interaction of decoration, beautification, deterioration, and messaging continually fill my compositions with exciting imagery. In recent years, the phenomena of the ever-changing Paint-Tag-Paint cycle, which appears on most city surfaces, has attracted my eye.”

San Francisco State University is his alma mater. He received his Masters in Art in 1978. Robert is currently a Professor Emeritus of Photography at Palomar College in San Marcos, California. His teaching career started at Palomar in 1989.

His Photographs have been exhibited and collected internationally. 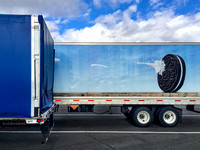