Not attempting a traditional portrait approach, I opted to composite and manipulate to create idiosyncratic self-portraits. I felt that it was a way to move towards images I was willing to share.
As is typically part of my compositing creative process, I tried many ideas. When I was generating works, I would reject the images about as fast as I was combining the parts. Sometimes I would exchange a part or piece to strengthen the overall concept that I was working towards. Other times the whole concept was discarded, and I would start over. Ultimately, I came up with about 8 completed images. I framed 4 of the best of these for this show.

Splitting Hairs was made to address my aging during the 55 Years between shots.

Waiting For The Universe To Fall In Line – I wanted to be part of an urban landscape image that I would typically make.

Shadow Twins - My shadow over the white paint splatter/ spill attracted me to the image, but I made the twin shadow and that gave it a bit of baleful overtones.

Just Suppose You Juxtapose – The Miss Piggy poster at a bus stop stimulated this one. The subjects are ambiguously peering out of the frames. Is it comic or sinister? Is there a commonality in the placement? What’s up with the monster stare & crocodile reclining about to be chocked by a human hand? Give it whatever meaning you want. It was fun putting together. 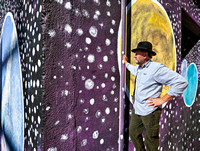 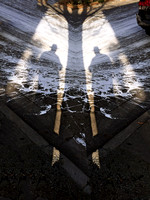 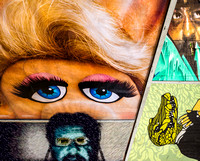