Artist Statement:
These three images are designed to tell a story that capture the visual balance of movement and stasis and the symbolic imagery of “before and after”. The interplay of light creates a more dramatic, more enigmatic image.

In “City Nights”, the winding staircase gives a sense of motion while the empty, peopleless storefront suggests the day is over. The hour is late. All have gone home for the night.

A solitary figure waiting on the platform in “Night Commute” confirms it is late and the work day is over. Floating hats on the wall may further suggest the commuter is baffled or has “lost their hat” as the train schedule is checked again and again hoping the last train will soon arrive.

In “Nightshift”, the train’s interior offers a different story; perhaps the story of the beginning of a new shift - a night shift or even a day shift. Commuters crowd together, each with a different destination, riding with emotionless faces." Was this the last train"? One could even ask,"Did the commuter make it?" What is seen in this image bridges the aspect of time back to ”City Nights” and “Night Commute”; back to the notion of “before and after” back to the idea of movement and rest. 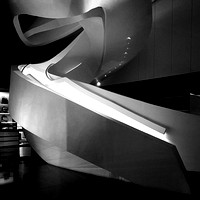 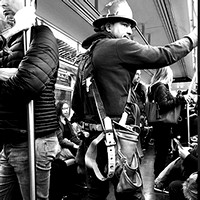