I shot this series of images in my suburban neighborhood. I used an IPhone 6s except for one that I shot with a SLR. Children’s chalk art and messages relevant to the virus and daily life are present on several driveways. It was difficult to choose just one, but it is humorous and poignant.

It wasn’t difficult to find examples of changed behavior in the era of Corona Virus. Pre C-virus, there was little activity in front of people’s houses and the streets. People were at their places of work, and children at school. There has been a large increase in the number of people I see daily, at various times, walking with family, walking dogs, and riding bicycles. I stood some distance away from my neighbors and their properties while shooting, so as to reinforce the viewer’s sense of the forced distance of people from each other, and also to convey a sense of isolation and smallness vis a vis an invisible enemy. I think I also captured my neighbors' resilience, persistence, humor, and creativity in attempting to fulfill the basic need for social contact. This small project left me with a sense of hope. 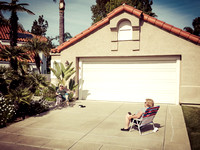 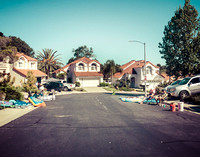