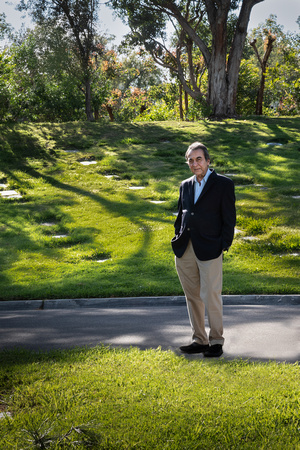 Azim’s 20-year-old son Tariq was working as a pizza delivery person while attending San Diego State in 1995. Tariq was robbed and murdered one night while delivering pizza. His murderer was a 14-year-old boy, Tony Hicks, who was following the direction of a gang leader when he pulled the trigger, ending Tariq’s life, and causing horrific sorrow for a whole community of people. Azim has spent hours and days and years searching deep within his soul attempting to understand and make some kind of sense of this tragedy, and also to find some positive outcome.

“What if I became a foe: not of the boy who killed my son, but of the forces which led him to kill my son? What if I reached out as far as I possibly could, and devoted myself to fighting the plague of youth violence?” Azim arranged to visit Tony Hicks in prison. “I looked him in the eyes and did not see the eyes of a murderer,” he said. What followed for Azim was a decision to forgive Tony, and to create the Tariq Khamisa Foundation, founded to help kids like Tony, and to stop “kids killing kids.” Azim teamed up with Plez Felix, Tony’s grandfather. They visit schools - primarily middle and high schools throughout the U.S. and also in other countries, and talk about what happened, and what can be learned from it.

Recently Azim received a letter from a high school senior, one of over 100,000 letters he has received since the tragedy. The letter said, in part, “I previously attended a middle school where you presented about seven years ago and changed the outlook I had on life at the time. I have been in the foster care system since age eight, and your story and ability to spread the idea of peace inspired me to take the appropriate steps towards success as a 13-year-old. Following your presentation ... my attitude towards the world no longer represented hatred but took me down a path of forgiveness ... of my biological mother, whom I deemed responsible for my being in the foster care system, and forgiveness of the world whom I held accountable for all of my young confusion and pain. Today as a senior, I am extremely appreciative of the message you have and continue to spread as it has not only changed my life seven years ago, but still influences my daily journey … Thank you again, Mr.Khamisa.” -- Vanessa Brunetta, The Bishop School ‘20
© The Photographer's Eye: A Creative Collective
User Agreement
Cancel
Continue